In an article in today’s English Guardian entitled Best frenemies, David Runciman explores the disturbing hold of British newspapers over politicians (in particular the Rupert Murdoch-owned papers). Often commented upon, the influence of this section of the press on government and political decision making is viewed by many as a corruptive force, one that appeals to the lowest common denominator, espousing the values of democracy while undermining its most cherished values (debate, pluralism, trust, freedom of speech). Many resent the way in which prime ministers in particular kowtow to the demands of press barons, preferring to curry favour rather than court
controversy.

The magnetic quality of these papers currently seems to be as strong as ever, despite the fact that newspaper circulation is on a downward trend. Like the music industry, the newspaper business is fighting a losing battle against the reach of the internet. So why
the fear of the press among the political classes? One obvious but incorrect response
is to point at the relationship between the press and voting patterns. Contrary to popular opinion, the power of the press does not reside in its power to sway political opinion – more often than not people read papers to reinforce their personal views, rather than challenge them. As Runciman points out, it wasn’t the ‘Sun Wot Won it’, they just cashed in on the result of the 1979 election – the British election that saw Margaret Thatcher become Prime Minister. 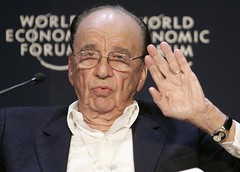 press to cause rancour in political ranks (divide and conquer), combined with their power to harm political reputations. Press magnetism revolves around both the reality and the threat of relational damage: ‘Most people hate to see themselves exposed in print and know the harm it can do’. The real political power of the press lies in its
capacity to intimidate, not just politicians but also ‘the people the politicians would need on their side if they wanted to stand up to the press’.

The attack dogs of the British press are the destroyers of reputations, using the threat of shame and humiliation to keep people feeble and emasculated. They sniff out weakness and then go for the emotional jugular. They provide an excellent but crooked illustration of how the interpersonal is political, the relational world a battle ground for the politics of power. Their corrosive influence also indicates how fragile the relational world is, its emotional content susceptible to those who appreciate its power while choosing to ignore its consequences.